A family tradition for over 50 years, selling classic & fine motorcars throughout the world.
1956 CITROEN TRACTION AVANT - 6-WINDOW FAMILIALE LIMOUSINE
Questions? Contact Us
Signup for our Newsletter
1956 CITROEN TRACTION AVANT RARE TRACTION AVANT / 6-WINDOW LIMOUSINE JUST IN FROM SOUTHERN CALIFORNIA ONE OF ONLY A HANDFUL IN THE UNITED STATES TRULY A COLLECTOR’S DREAM!
1956 CITROEN TRACTION AVANT – 6-WINDOW FAMILIALE LIMOUSINE
Here is a beautiful, rare 11CV (four cylinder ,1911CC) Citroen Traction Avant. The Traction Avant, designed by André Lefèbvre and Flaminio Bertoni in late 1933 / early 1934, was one of the most successful cars with front wheel drive in the 1930’s. “Traction Avant” is French for front wheel drive, literally meaning “frontal traction”. The Traction Avant used a longitudinal, front wheel drive layout, with the engine set well within the wheelbase, resulting in a very favourable weight distribution, aiding the car’s advanced handling characteristics. This revolutionary car used an arc-welded monocoque frame, where most of the other cars of the era were based on a frame (chassis) onto which the body (“coachwork”) was built. This type of frame resulted in a lighter vehicle now used in most modern vehicles. The suspension was very advanced for the car’s era. The front wheels were independently sprung, using a torsion bar and wishbone suspension arrangement, where most contemporaries used live axle and cart-type leaf spring designs. The rear suspension was a simple steel beam axle and Panhard rod with unequal trailing arms, to allow the two torsion bars to run parallel to each other, across the car’s width. Since it was considerably lighter than “conventional” designs of the era, it was capable of 100 km/h (62 mph), and used only 10 litres of gasoline per 100 km (24 mpg). Due to its robust build, many enthusiasts to this day bring out their Traction Avant cars for an exotic rally drives all across the globe. Finished in stunning Dark Midnight Blue with beautiful Ascot Gray interior. This beautiful car was just purchased in Southern California from its most astute collector. It has been beautifully preserved and maintained and is among less than a handful known to exist in the U.S. I personally believe the investment potential of this rare and sought-after French masterpiece will grow beyond your imagination. Bid with confidence – this just might be one of the best finds on eBay!
N.A.D.A. Value ~
$33,790.00

$10,890.00
SALE PRICE
$22,900.00
Please feel free to call with any questions. 314-291-7000 info@schmitt.com
TRADES ACCEPTED - FINANCING AVAILABLE
Please note: All of our vehicles receive a comprehensive pre-delivery inspection before leaving our dealership. Kindly allow up to 14 days from the date of sale for your vehicle to be delivered. As we are currently experiencing a high volume of sales, we are doing everything in our power to deliver your vehicle as soon as possible!
Year:
1956
Make:
CITROEN
Model:
AVANT FAMILIALE
Color:
Dark Midnight Blue
VIN:
428779
Stock Number:
404437 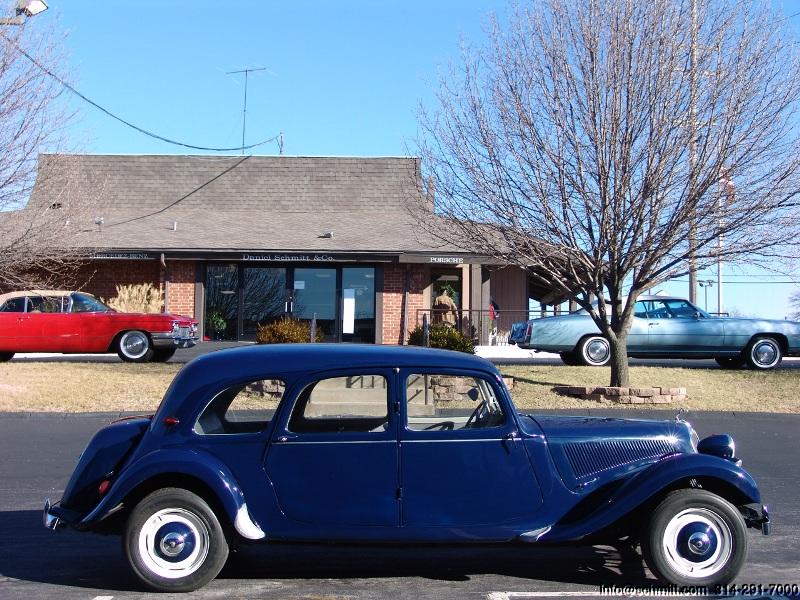